- Hear from the most audacious and provocative speakers in the digital marketing industry.
- Gain insight into emerging strategies, the latest innovative technologies, and best practices.
- Network with thought leaders, build your network and collaborate with your peers.

DigiMarCon Dubai 2022 offers all of the elements you need to achieve digital marketing success! Conventional thought will be challenged, new ways of thinking will emerge, and you will leave with your head and notebook full of action items and ideas to lead your agency / team / account to even greater success.

Come to DigiMarCon Dubai 2022 and discover how to thrive as a marketer in a world where everything is digital.

Take advantage of our super saver registration rates and secure your seat early. 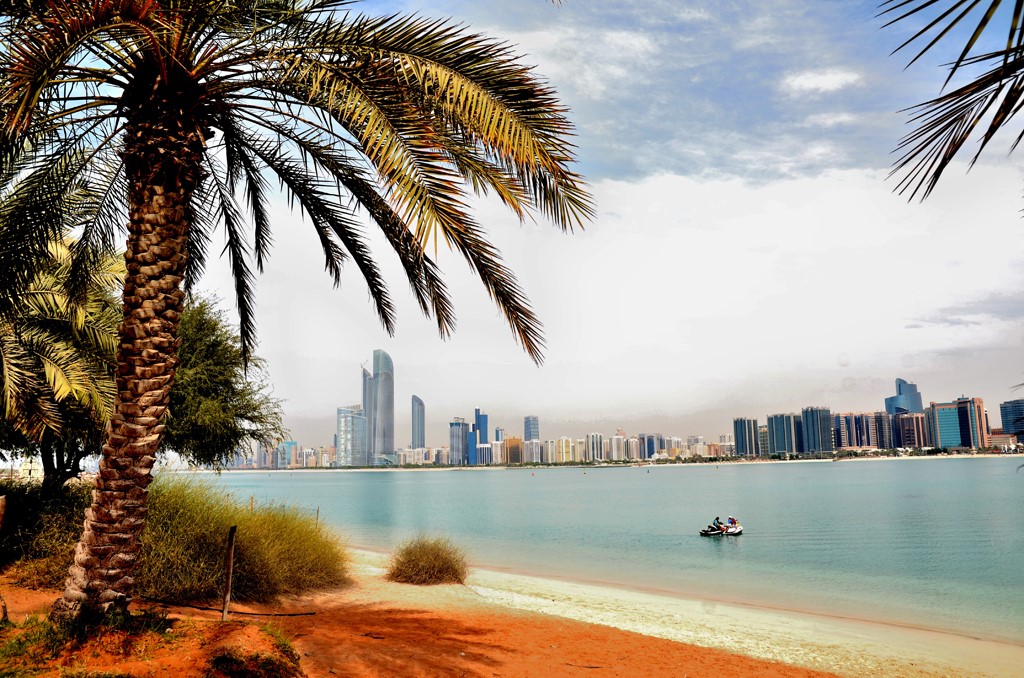 The United Arab Emirates (UAE) has a desert climate, with very mild winters and very hot and sunny summers, in which the humidity of the Persian Gulf makes the heat unbearable. The annual precipitation is almost everywhere below 100 millimetres (4 inches), and is concentrated in the winter months. The rains are rare, but they occur in the form of showers or downpours, which sometimes can be intense.
The country is made up of seven emirates, almost all overlooking the Persian Gulf (Abu Dhabi, Ajman, Dubai, Ras al-Khaimah, Sharjah and Umm al-Quwain), and one overlooking the Gulf of Oman (Fujairah). The biggest emirate, which also includes the capital, is Abu Dhabi, even though the most famous, because of its futuristic buildings and modern tourist resorts, is Dubai.
In Dubai, the daily average temperature goes from 19.5 degrees Celsius (67.5 °F) in January (so we are at the boundary between the subtropical and the tropical climate), to around 36.5 °C (98 °F) in August.
Here are the average temperatures of Dubai.
Average temperatures – Dubai

In a typical year, only 98 millimetres (3.9 inches) of rain fall, most of which between December and March. In Abu Dhabi, still on the coast but more to the west, it rains even less, around 50 mm (2 in) per year.
Here is the average precipitation in Dubai.
Average precipitation – Dubai

The sea in the Emirates is warm enough for swimming all year round, although from January to March it drops to 23 °C (73 °F); in summer it gets very warm, and it exceeds 30 °C (86 °F) from June to October, so as to allow long swims. On the Gulf of Oman, in winter the sea is a bit warmer than in the Persian Gulf. Here is the sea temperature in Dubai.
Sea temperature – Dubai 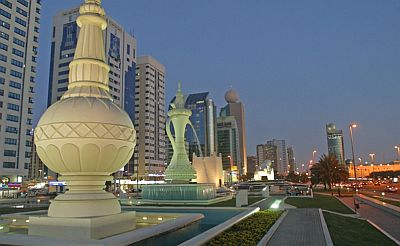 In the northeast, the Al Hajar Mountains, which separate the coast of the Persian Gulf from that of the Gulf of Oman, the climate is still desert, although in the winter months it rains a bit more often than in the plain. Temperatures do not drop by much compared with the plain, except in the areas above 1,000 metres (3,300 feet), where it can get cold in winter, while in summer the heat is more bearable.
The south of the country, in the emirate of Abu Dhabi, is occupied by the vast sandy desert of the Rub al-Khali, and is almost uninhabited except in the oases, such as that of Liwa, and near oil and gas extraction facilities. Here the climate is similar to that of the coast, and even hotter in summer, but the air is drier because of the greater distance from the sea. The sun in the Emirates shines all year round, sometimes however some cloud banks may pass, both in winter and in summer.
Sunshine – Dubai

All year round, but especially in spring, the United Arab Emirates may be affected by strong winds, which can bring dust and sand storms.

The best time to visit the United Arab Emirates is winter, from December to February, which is a pleasant and sunny season. Thus, you will avoid the oppressive heat of the long summer months.
For a beach holiday, the best months are March and November (with a preference for the latter, because the sea is warmer), because when it gets too hot, even sunbathing can be a challenge.

In winter, light clothes for the day, sweater and jacket for the evening and for cool days, scarf for the wind.
In summer: lightweight clothes, loose-fitting and made of natural fabric (cotton or linen), desert turban, sweatshirt and scarf for air-conditioned places. For the reef, equipment for snorkeling, water shoes or rubber soled shoes.
For women, it is best to avoid shorts and miniskirts outside tourist resorts. 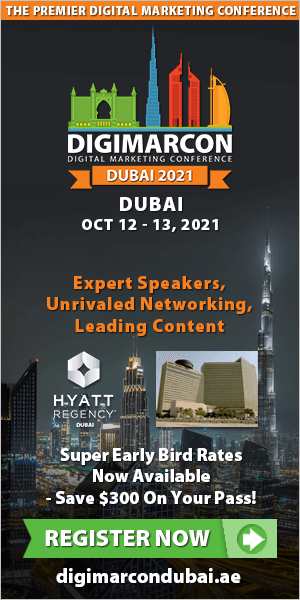 Business and marketing professionals have a lot of choice in events to attend.
As the Premier Digital Marketing, Media and Advertising Conference & Exhibition Series worldwide
see why DigiMarCon stands out above the rest in the marketing industry
and why delegates keep returning year after year

Building relationships matter! At DigiMarCon Conferences we have more networking breaks on our program than others. On average there are 8 Networking breaks at each event giving delegates ample opportunities in a relaxed atmosphere to meet others over the 2-days at the event; from 1-hour round table networking luncheons to 3-hour dinner receptions. These networking breaks are set in picturesque locations to facilitate memorable experiences while fostering new relationships. Such experiences include enjoying cocktails and the Sunset over the Pacific Ocean on a private Ocean Terrace in Santa Monica, to being on the Sydney Olympic Stadium playing arena at night enjoying cocktails under the lights, to dining at the 360 Revolving Restaurant at the top of the CN Tower in Toronto for a Dinner Reception, enjoying cocktails on a private promenade overlooking Times Square in New York City, or having fun at the Dazzles Night Club onboard the Royal Caribbean Oasis of the Seas for a Farewell Party, etc.

DigiMarCon Keynotes, Panels and Master Classes are facilitated by the foremost thought leaders in the industry, from celebrity social media influencers to CMO’s from the largest Fortune 500 company brands that are disrupting the digital marketing, media and advertising industry, such as Google, Facebook, Microsoft, Amazon, Oracle, Adobe, eBay, Netflix and more. All presentations are pitch-free, and include actionable takeaways, case studies, strategies and tactics, ready to be applied when back in the office.

At DigiMarCon Conferences you are never ‘left in the dark’…. literally, in a large room far away from the stage and speakers, crushed in tight theater seating, without even a table, while sitting in the dark. At DigiMarCon all delegates have premium meeting space in luxurious ballroom well-lit spaces, with comfortable seating with table enabling delegates to use their laptop to take notes with ample charging facilities onsite in a comfortable space to learn and thrive. All tables are situated close with direct view of the stage.

DigiMarCon Conferences are affordable to attend, from single-day event passes up to two-day VIP options at a fraction of the cost of other industry events. We offer significant discounts for early bird registrations. Additionally, on top of time-limited discount pass rates, because budgets are tight, we want to make sure all groups have a chance to attend DigiMarCon. For government employees, students, academic, startups, non-profit organizations and teams, we offer generous discounts off the prevailing registration price.

Attend DigiMarCon and you become part of the show! DigiMarCon Conferences tap into the talent of the room, drawing from the knowledge and experience of the professionals in the audience. All DigiMarCon events include regular interactive question and answer sessions with speakers and the audience ideal for collaboration, audience polls, along with ice-breaker and group exercises, steered by charismatic Emcees.

Meet the Speakers in Person

DigiMarCon Conferences put you right up and close with the speakers giving you the opportunity to meet these social media influencers which you follow in person. Speakers are never hidden in private speaker rooms away from the audience, they are in the auditorium sitting right beside you and participating.

Attending a conference is a well-researched decision. There are many factors to consider such as location, time, venue, cost, speakers, content, etc. At DigiMarCon our results-obsessed Customer Service team are at your service before, during and after the event to help with your needs. It’s at the core of what we do — it drives our business. Offsite, we are ready to assist you via phone, ticket or chat. Onsite at our Conferences, friendly DigiMarCon staff serve as your hosts. They welcome your input and are happy to assist you.

At all DigiMarCon Conferences is the co-located exclusive event TECHSPO Technology Expo, which showcases the new generation of technology and innovation, including; AdTech, MarTech, Internet, Mobile and SaaS technologies. Be inspired, amazed and educated on how these evolving technologies will impact your business for the better. Unlimited Access to TECHSPO Technology Expo is included with all DigiMarCon passes.

DigiMarCon All Access & VIP Passes include a 12-month on demand access to hundreds of hours of DigiMarCon speaker keynotes, panels and master class presentations from recent DigiMarCon Conferences, including videos, slide decks and key takeaways, available on demand so you can watch what you want, when you want.

Attendees of DigiMarcon Conferences gain membership to an exclusive global Digital Marketing, Media and Advertising Community of over 500,000 worldwide subscribers to our award-winning digital marketing blog and over 100,000 members to the International Association of Digital Marketing Professionals (visit https://iadmp.org). This global community comprises of innovators, senior marketers and branders, entrepreneurs, digital executives and professionals, web & mobile strategists, designers and web project managers, business leaders, business developers, agency executives and their teams and anyone else who operates in the digital community who leverage digital, mobile, and social media marketing. We provide updates to the latest whitepapers and industry reports to keep you updated on trends, innovation and best practice digital marketing.

The events industry has forever changed in a world affected by COVID-19. The health and safety of our guests, staff and community is our highest priority and paramount. The team at DigiMarCon is dedicated to ensuring a great experience at our in-person events, and that includes providing a safe, clean and hygienic environment for our delegates. Some of the key areas we have implemented safe and hygienic measures include;

DigiMarCon has always been industry leaders of the Hybrid Event experience for years (a hybrid event combines a "live" in-person event with a "virtual" online component), no one needs to miss out on attending our events. Each DigiMarCon Conference can be attended in-person (with a Main Conference, All Access or VIP Pass) or online (with a Virtual Pass) giving attendees a choice for the experience they want to have. Attending virtually by viewing a Live Stream or On Demand enables participation by people who might be unable to attend physically due to travel or time zone constraints or through a wish to reduce the carbon footprint of the event. If you would like to meet the speakers, network with fellow marketing professionals at refreshment breaks, luncheons and evening receptions, check out the latest Internet, Mobile, AdTech, MarTech and SaaS technologies providers exhibiting then it is highly recommended to attend DigiMarCon in-person. As the largest Digital Marketing, Media and Advertising Conference series with events in 33 international cities worldwide, across 13 countries, there is bound to be a DigiMarCon Event near you to attend in-person if you can.

DigiMarCon Conference Series is the annual gathering of the most powerful brands and senior agency executives in your region. The Sharpest Minds And The Most Influential Decision Makers - Together for Two Days.

The Largest Digital Marketing, Media and Advertising Conference & Exhibition Series in the World!